To make Spectator View work in our own HoloLens project, we actually have to understand how it’s working, what it is doing and how it is related to the HoloLens Sharing Experience. Turns out that there is a lot to do in our app (including transmitting custom messages) to prepare it for the full Spectator View experience!

The Spectator View is based on the Sharing experience of the HoloToolkit, but it contains its own “fork” of the code. Instead of us having to manually decide & code which objects and interactions to send via network messages (as in the normal Sharing use case), the fork of the Spectator View transmits some data by default to our DSLR-mounted HoloLens.

However, it’s important to understand that if you use Spectator View, you also need to integrate most of the Sharing code. Essentially, a lot of code is duplicated between the two frameworks, with only slight differences in order to give the DSLR-mounted HoloLens a special role, plus the PC running Unity also needs to connect in order to correctly render the scene.

According to the instructions of the SpectatorView sample, you can include and exclude some objects to synchronize (or to hide) in the recording through Anchor\SceneManager. Included objects should be children of the SceneManager.

What is this Anchor\SceneManager and where is it coming from? In the previous step of the blog series, we have assigned the Anchor prefab to the SpectatorViewManager . Turns out this was a dead end.

By looking at the ShardHolograms example, we can see that the HologramCollection  in the hierarchy panel has all the SV_* scripts as well, plus it’s referenced as Anchor  object in the SpectatorViewManager . The HologramCollection  actually has a lot more scripts, but most of these don’t concern us as they’re specific to the gameplay of the example. 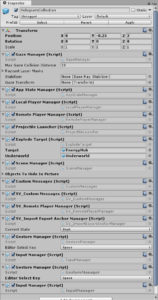 As I don’t want to change the hierarchy of my entire project, I just add the four scripts to the root GameObject where I’ve placed all the models (in my case called “Objects”): 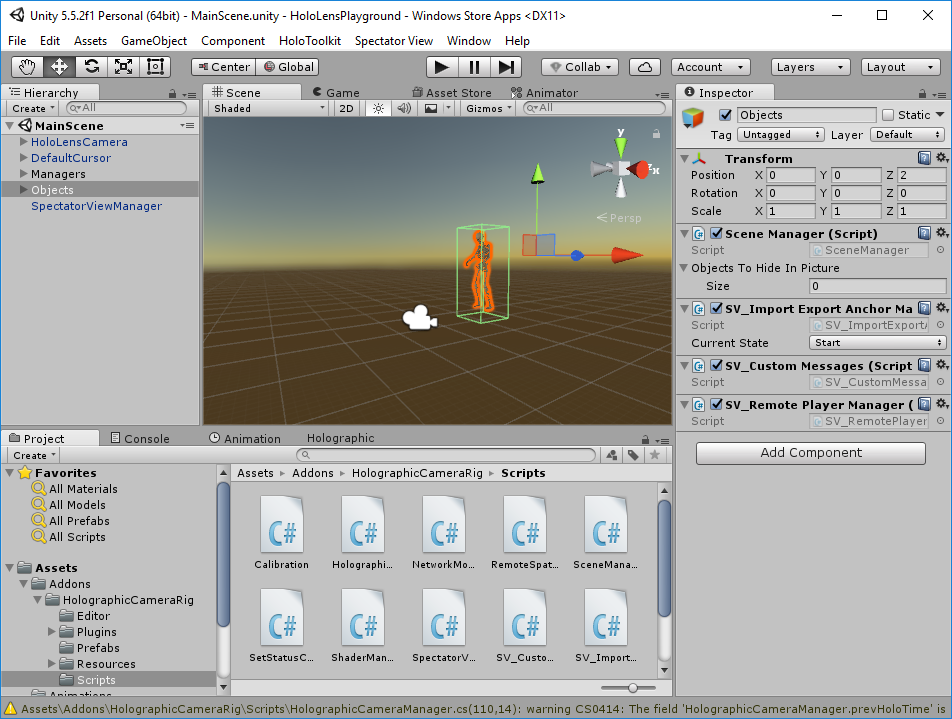 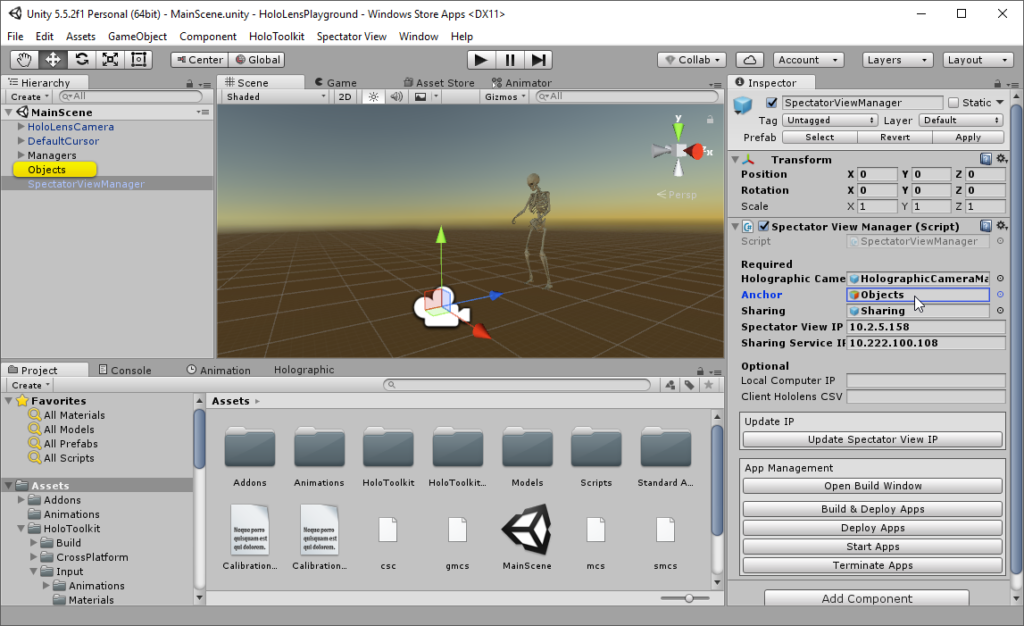 Even though there might be some code in Spectator View to automatically synchronize parts of the scene, that didn’t really work (for me). I didn’t dig too deeply into the reason for that; might be that the default scripts only synchronize the scene changes to the Unity Compositor, but not to all involved HoloLens devices?

In any case, a good HoloLens app that is shared between multiple HoloLenses should implement the full Sharing capabilities.

Thus, I went ahead to add custom messages manually to the app, in order to transmit my own events between all involved HoloLens apps so that all HoloLenses connected to the experience (including the PC with Unity that does the recording) are always synchronized.

To share location updates and other custom scene changes, you need to create, send, receive and handle own custom messages over the network. The SV_CustomMessages  script contains these messages for the Spectator View. Of course, you could go ahead and adapt this to your needs. However, if there is an update to Spectator View, it’s problematic if you change files that belong to original Spectator View Code.

Also, the example is transmitting the placement of an object (in that case the “game base”) and synchronizes that location to all connected clients. To get started in the quickest possible way, I directly re-used the sample code and did not modify it (yet).

Of course, the CustomMessages class also contains a lot of other code that we don’t need (e.g., for shooting projectiles), but we can clean that up at a later stage when everything works. The main method for us of the CustomMessages  class is the SendStageTransform()  method:

I copied the whole CustomMessages  script from the example into the Assets/Scripts  folder of my own project, and added it to my Objects  node in the scene where all the Spectator View scripts are already present: 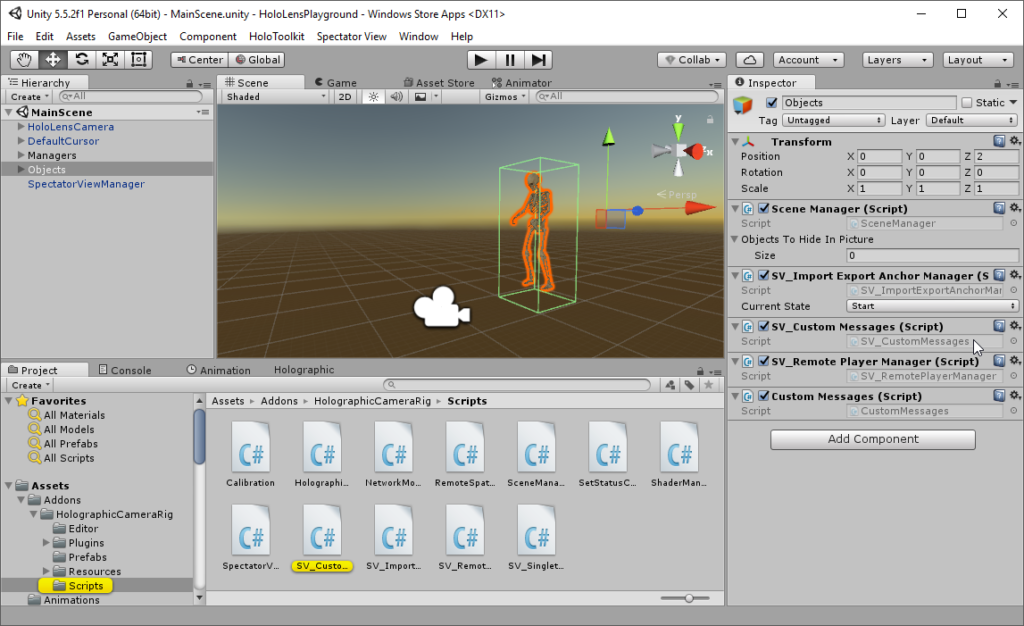 That’s a great way to start, as you don’t have to define your own message types for now and the class also handles receiving this message.

Now that we have the SendStageTransform  method in our project, we obviously need to actually make use of it. Right now, my project features the functionality to simply place a hologram into the scene. I’ve used the standard TapToPlace script from the HoloToolkit for this functionality.

If we now need to send the location to other HoloLenses whenever a user places the object, we need to modify that script. Again, instead of directly changing code in HoloToolkit’s TapToPlace  script, create your own copy of it in your Scripts folder. I called my script TapToPlaceShared :

I’ve made the following changes to the original TapToPlace script:

We’re almost there! The next blog post will add the final tweak to our project and show you what you get out of the Spectator View!