The scenario consisted of a high quality torus that floated above the floor. The shadow was generated using different levels of detail; the highest had no visible edges, while the lowest was basically just a pentagon.

Subjects were asked whether the shadow looked realistic and acceptable. 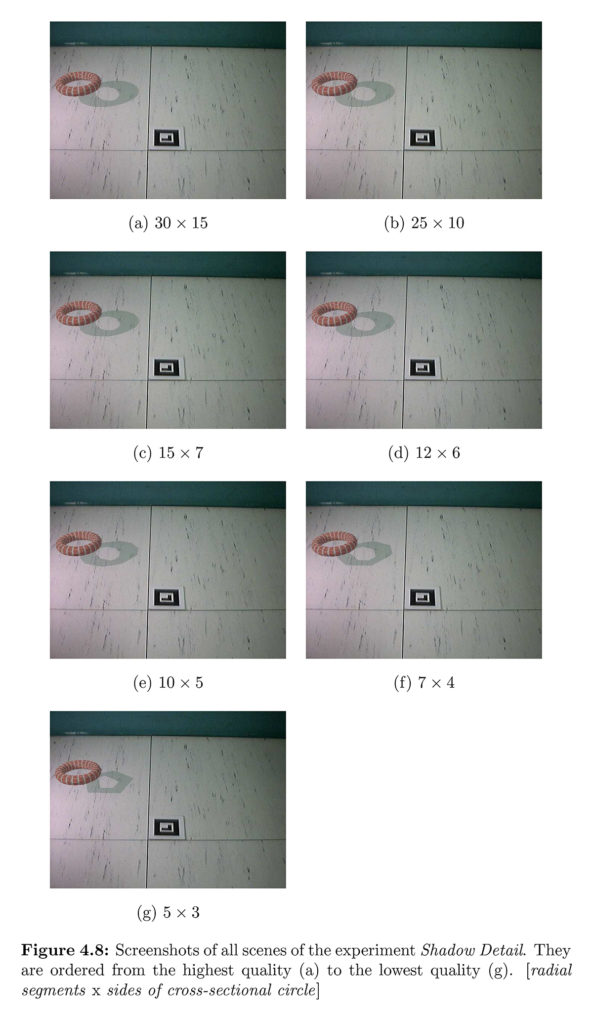 It was expected that subjects would more easily find shadows acceptable than realistic. 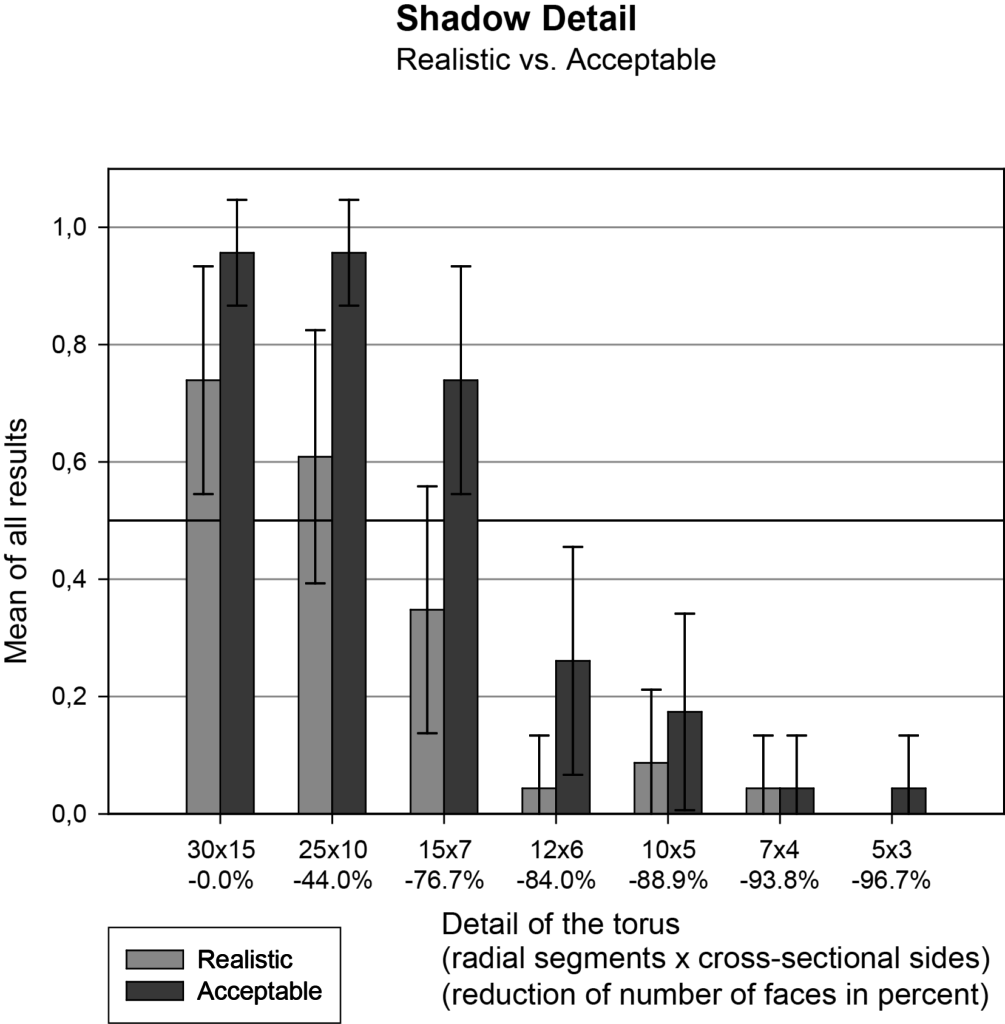 The results show that with the reduction of the shadow detail, the realism quickly fades as well.

Even with maximum detail, only 73.9% judged the shadow as realistic. This might be because of the hard shadow borders and a resulting unfamiliar shadow shape. However, the results show that it was possible to reduce the number of radial shadows by 1/6th, leading to a reduction of the number of faces by 44% while still keeping a look with a similar level of realism compared to the highest quality version.

The bar for judging a shadow as acceptable is much lower. The acceptable rate of detail reduction highly depends on the application. Quite often, the quality level with a reduction of faces by 76.6% should be sufficient.

If rendering projected shadows, using soft shadows is significantly more complex than calculating hard shadows. In reality, only a perfect point-light source would have hard shadows – this does not exist. In all other cases, the shadow has a certain penumbra.

The last part of the study tried to find out if a soft shadow would be worth the additional effort. 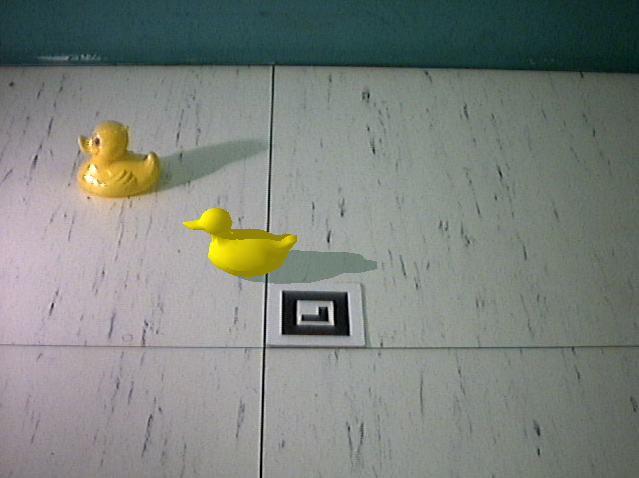 Subjects were shown a real and a virtual rubber duck. Two questions were asked: are both shadows visually consistent? Does the difference have a negative or disturbing effect on the visual quality? 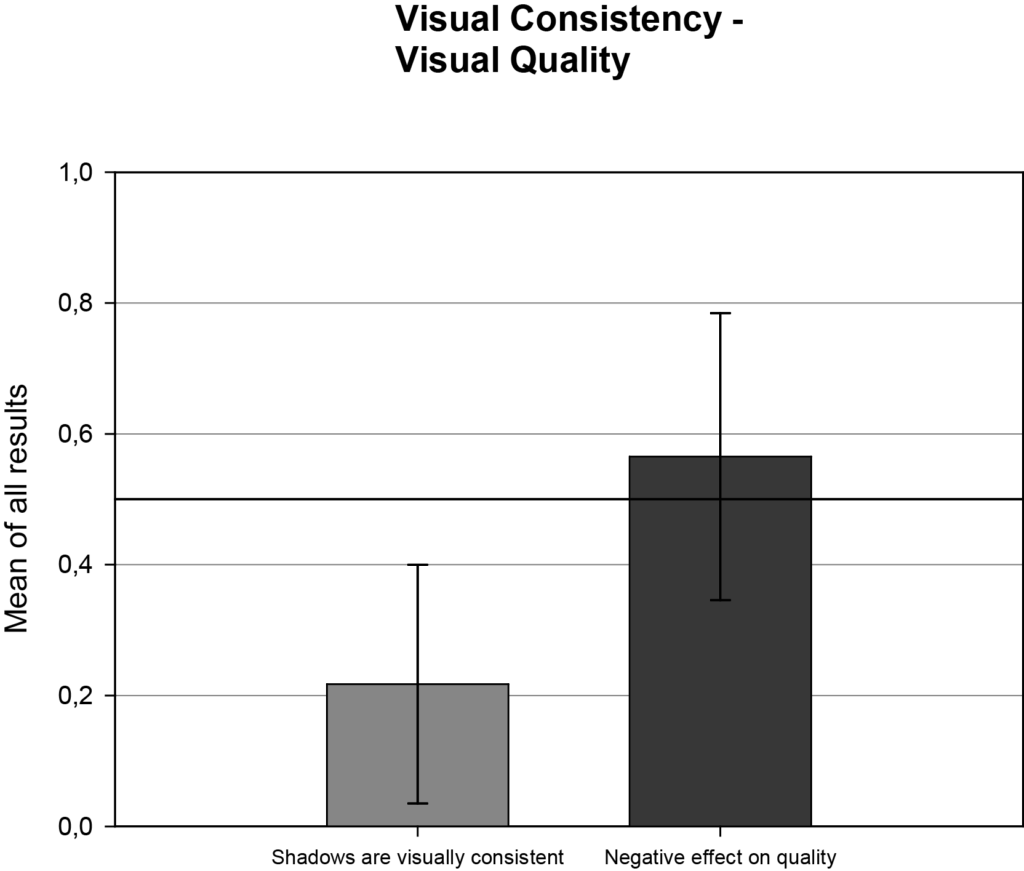 Only 21.7% of the participents thought that the two shadows of the real and the virtual object were visually consistent. It shows that people noticed the artificial hard shadow and could easily discern it from a real shadow.

When asked if the appearance had a negative or disturbing effect on the visual quality, the results were mixed. 56.6% responded with yes. If shadows play only a supporting role in the application, hard shadows should therefore not be much of a problem for the visual appearance. However, if shadows play an integral part, the additional effort of soft shadows might well be worth it.

The short blog post series examined several aspects of shadow in Augmented Reality environments. It proved that it is rather impossible to judge the distance of virtual objects to the floor without shadows.

However, even with shadows, it is still necessary to plan the scenes carefully. The information that shadow provides might even be misleading. Simply enabling shadows in an AR scene doesn’t automatically lead to an improved scene perception. Careful planning of the layout of the scene might be needed.

What could possibly prove to be most difficult is the accuracy of the virtual light position. While the experiment has shown that there is indeed a certain tolerance, it is not very large. Especially if shadows are too long, users will quickly notice.

Last, rendering perfect shadows is extremely difficult for today’s hardware. Compromises have to be made, and it’s important to carefully evaluate the required shadow detail – both in regards to simplified shapes, as well as softness of the shadow edges.

Next, we will take a look at how to use shadows for Mixed Reality scenes in Microsoft HoloLens. The HoloLens has a light-based display, and therefore cannot darken the real world to cast a shadow from a virtual object. However, with negative shadows, it’s possible to trick the users.